Entrepreneurship – It’s In Our Nature!

Already by 1640, the British, French and Americans were frequent visitors to our region thanks to its favorable geographical position. Malcolm Matheson, a merchant from the Isle of Lewis in England, built a first home around 1875 and opened a store in 1877. Scottish settlers christened the young town, Agnès. In 1885, two French Canadians, Télesphore Lemay and Antoine Roy, settled there and founded the village of Lac-Mégantic.

Over time, the Mégantic region is influenced by the railroad and lumber industries, both of which played a key role in urban and economic development. The surrounding forest shaped several industries that, over time, would benefit from this source of raw material. Lac-Mégantic was chosen as the point where the Canadian Pacific Railway Co. (CPR) and the Québec Central routes would intersect.

The ingenuity of the Mégantic region’s people, from their strong Scottish and Beauceron roots, is inspired by the region’s natural beauty overflowing with lakes and mountains, to shape the materials from here and elsewhere, and to conquer new markets.

The strength of their character can be described in three words: autonomy, innovation and perseverance.

Thus, the entrepreneurs’ passion to excel manifests through their business accomplishments. The great outdoors and a passion for work well done continue to attract many Europeans, happy to apply their expertise to successful companies in North America. 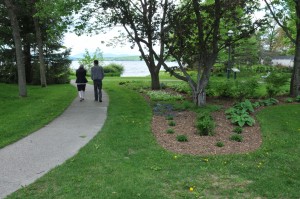 What more can be said about the quality of life in such an exceptional location? No waiting in traffic jams more time and space to pursue your passions, spending time with your family. And all this with property values that are well within reach.

For an region of 22,340 residents, there is no lack of ambition…

If you visit Ground Zero in New York or the Lincoln Memorial, the Martin Luther King Memorial monuments in Washington DC, you’ll learn that the architectural stones displayed were actually made by A. LACROIX GRANITE in St-Sébastien!

ABRESSA, a Spanish company and a leader in stone polishing, chose the Mégantic region to establish its Canadian subsidiary.

TAFISA CANADA in Lac-Mégantic has the largest manufacturing facility of particleboard in North America.

PANOLITE is the first Canadian manufacturer dedicated to the industrial manufacturing of lightweight panels.

And within less than a 100 km radius, the presence of the following manufacturing leaders: BPR, Canam-Manac, Boulangerie St-Méthode, Procycle, Kruger, Cascades, Groupe RGR, Garaga, and more.

Contact us today and join this dynamic group of entrepreneurs!